The title pretty much sets the tone for where I’m going with this post.

Back in September 2018, in the midst of helping my cousin with her upcoming nuptials the following month, my husband’s grandmother passing away, running between Manhattan and Brooklyn with over $15M in inventory, I noticed something was off with me and I couldn’t figure it out. I would be with clients walking through a $4M townhouse trying to entice their appetite for real estate all the while I was thinking about my appetite “I could really go for some McDonald’s right about now.” Please keep in mind, the last time I ate Mickey D’s was in 2016, after a night of drinking with my friends and we had the munchies on our way home. After a week of fast food cravings and a heightened sense of smell, I was a week late on my menstrual cycle, and well panicking for 5-days straight at the thoughts of being pregnant, I bit the bullet and bought a pregnancy test. Low and behold, my intuition was on point and I was expecting my first child with my husband of 4 1/2 years (been together since 2008). The first thing I thought of was “OMG how am I going to do this with my career on the rise!?”

I was in the middle of the casting process for Million Dollar Listing New York (surprise I didn’t get casted), I had a new development I just signed, clients I was currently working with, a secret project in the works, my husband’s company was growing rapidly (he went on to start another company a few months later), and the list goes on and on. A few weeks later I fell into a state of permanent nausea and fatigue; I don’t even know how to accurately describe what I was feeling, just AWFUL. Even though I was working out like I wasn’t pregnant, I was gaining weight and rapidly and the weight gain was a little difficult to mask. Let’s fast forward to December 2018, that’s when things got a bit harder at work. At this point I was suffering from pregnancy rhinitis, nausea, fatigue and I was off to Miami for Art Basel; an annual trip I take with fellow industry professionals, which mostly consists of men. Did I mention that I had made the decision not to share my pregnancy with anyone or on social media? Try hitting the club/restaurant scene with a bottle of water in your hand; I had to get creative because well I didn’t want people to ever think I was going to loose momentum. Needless to say, I got away with Miami (although I’m sure people were suspicious), and the following week upon my return, my stomach popped out of nowhere. THANK GOD FOR BLAZERS and scarves. I literally lived in black leggings, black tanks and blazers to help hide the growing bump.

After New Year’s things got crazier for me. My entire team picked up and went to another firm leaving me behind. For the record, I had to stay behind due to the new development I brought in to my company and well, I decided to take this time and work on my own. All honesty, I do feel it was an opportunity I couldn’t let slip me by and I’m truly glad I didn’t let it go. As much as I love (yes present tense) my former team members, at some point, everyone needs to spread their wings. So now, a first-time solo now pregnant agent, I was working harder than ever before. There was a small part of me that feared my clients wouldn’t understand (which I think almost every first time realtor mom would) so I was determined to move the $8M in inventory I was sitting on. Somewhere in between my hectic work schedule, doctors appointments, preparing my house for the arrival of our little girl, we somehow squeezed in a quick trip to Italy which I spent coordinating private showings after a launch party I had thrown the week before for a boutique new development located in the heart of Park Slope, Brooklyn.

By the time June had rolled around, I had closed on just shy of $5M in deals, put $4M into contract and was sitting on another $5M in inventory. Not crazy numbers, but keep in mind, this was me “taking it easy” as a first time solo agent and the pregnancy journey was on the more difficult side for me. On June 3rd, as I sat in the hospital bed awaiting my c-section, I shot off an offer for one buyer and followed up on another offer presented to one of my sellers. By that evening, I was on the phone trying to seal the deals all the while taking in the excitement of my new baby girl, Genevieve.

Here I am, 9 weeks later, another $3.5M in contract, back to the drawing board with another buyer and now taking on new listing meetings. I’m always a little offended when people ask me “OH!? congratulations on your baby! What are you going to do about work now?” I’m sorry… what do you mean? I’ve worked too long and too hard to give up because I had a baby. She actually motivates me to work harder, sell more, make more money because at the end of the day, I want her to have the best of everything. Will that mean spending time away from her? Yes. Will that mean spending money on childcare? Yes. Will being away from my daughter make me less of a mom? NO. Everyone has their own journey. Mine will consist of finding a balance between motherhood and my career and, truthfully, I welcome and embrace the challenge.

I’m a testament to the fact that women can do it all and I’m not shy about it. Listen, it’s not perfect, you’ll fuck up every now and then, your house won’t always be as tidy as you like (I’m OCD about the cleanliness of my home so that’s been fun), you’ll prob spend a lot of money on picking up dinner or on delivery services such as DoorDash, you’ll have a fight or two with your significant other, you’ll learn to appreciate services like Prime Now and Instacart, but at the end of the day you make it work; even if that means re-working your finances a bit to hire some help. In summary one has to turn to the old proverb, when there’s a will, there’s a way.

P.S. Can someone pass me a vodka bottle because MOMMA IS BACK! 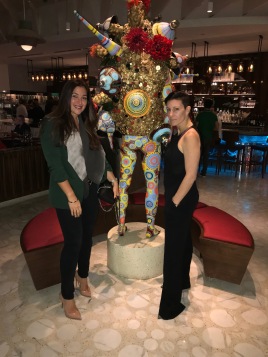