Bedford–Stuyvesant “Bed-Stuy”, has a very long and rich history that dates back to the 17th and 18th centuries. The neighborhood’s name combines the names of the Village of Bedford and the Stuyvesant Heights neighborhoods. As a matter of fact, In 1800, Bedford was designated one of the seven districts of the Town of Brooklyn, and, in 1834, it became part of the seventh and ninth wards of the newly incorporated City of Brooklyn.

Fast forward to the 1960’s, one of the first urban riots of the era took place there due to social and racial divisions in the city. During the Blackout of 1977 in New York City, Bushwick and Bed-Stuy became most associated with the blackout, more so than any other areas in the city? Once the lights went out, hundreds of people began breaking into stores along Broadway, the southern boundary separating Bushwick from Bedford-Stuyvesant, pulling down security gates, smashing windows, stealing furniture, TVs, etc. On the commercial strip beneath the elevated J train tracks, 45 stores were set ablaze; a few days later, what became known as the “All Hands Fire” started in an abandoned factory, taking out 23 more buildings in the heart of the neighborhood.

Looting after the 1977 Blackout 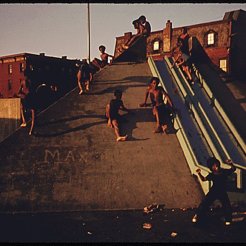 Let’s talk about today’s Bed-Stuy, a place that has another side to it’s rich history, that in pop culture. Bed-Stuy was home to some of the greatest entertainers of the 20th Century. Everyone from comedians Chris Rock & Tracy Morgan, singer/actress Lena Horne, American businessman and developer Larry Silverstein, and some of the most famous rappers/musicians the Notorious B.I.G., Jay-Z, ‘Lil Kim, and Mos Def to name a few. Who would have thought that not only did Bed-Stuy produce some amazing talent, but today you can find some amazing restaurants as well! 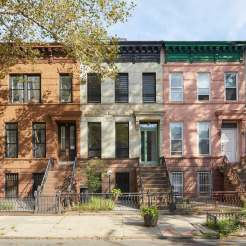 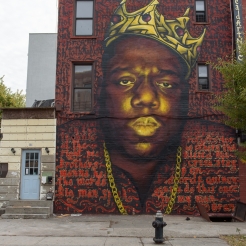 Today’s Bed-Stuy is so very different, so much so, 30 years ago if you even mentioned to someone that you were looking to buy real estate there you would be gifted a bulletproof vest and ran the chance of being committed to a mental institution. Now, if you say you’re looking for real estate in the neighborhood you would be commended for being a visionary and lucky to be able to afford something in Bed-Stuy. Let’s take a look at what $2M can buy you in this neighborhood with massive untapped investment potential!

Now who here likes food? Let’s take a look at some FANTASTIC options in Bed-Stuy Brooklyn!

With their daily deliveries of fresh bread and extensive natural wine menu, this casual restaurant offers a mixture of American classics like buffalo wings or a burger and Latin American fare like Dominican-style crispy rice.

Feeling Vegan and looking for scrumptious take out? Choose from a sandwich, taco, or salad formats, and be sure to order a delicious side or two, like cheese fries with smoked cashew cheese or flash-fried broccoli topped with a queso-esque sauce.

Where to Grab-n-Go. Two places I discovered minutes, hell if you don’t have to wait for cars to pass by, seconds away from my latest townhouse listing at 274A Kosciuszko Street:

Offers a whole menu of healthy options with some influences from Trinidad, the family-owned business infuses together parts of Brooklyn. From smoothies, to sandwiches this little gem never disappoints.